By Nate Beck · Listen to article

Law360 (June 24, 2022, 6:26 PM EDT) -- State and local lawmakers now have new powers to outlaw abortions and punish those who seek or perform the procedure under Friday's U.S. Supreme Court decision that overturned abortion as a constitutional right.

The high court's ruling effectively makes the procedure illegal overnight in dozens of states. Some have enacted rules banning abortion, while others have decades-old laws on the books that regulated abortion before the court ruled in 1973 in Roe v. Wade

that women had the right to end a pregnancy. 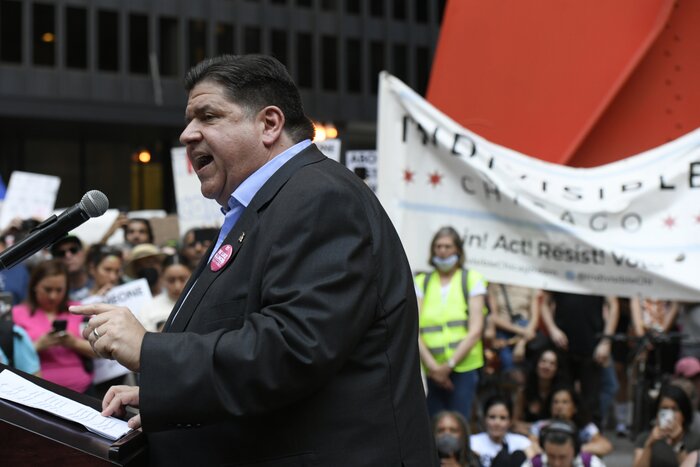 The decision will yield a patchwork of rules that vary wildly based on politics or circumstance. For example, lawmakers in Illinois joined Democratic counterparts in Connecticut and other states in rushing to codify state abortion protections and signal that the Prairie State would remain a refuge for those seeking the procedure in the Midwest. In neighboring Wisconsin, by contrast, it is now a felony to perform an abortion under a 173-year-old law that was in place before Roe.

Michelle Banker, director of reproductive rights and health litigation for the National Women's Law Center, told Law360 that the court's ruling empowers states to regulate abortion however they see fit.

"It opens up chaos," Banker said. "We're kind of in a brave new world now of a rapidly evolving legal landscape." 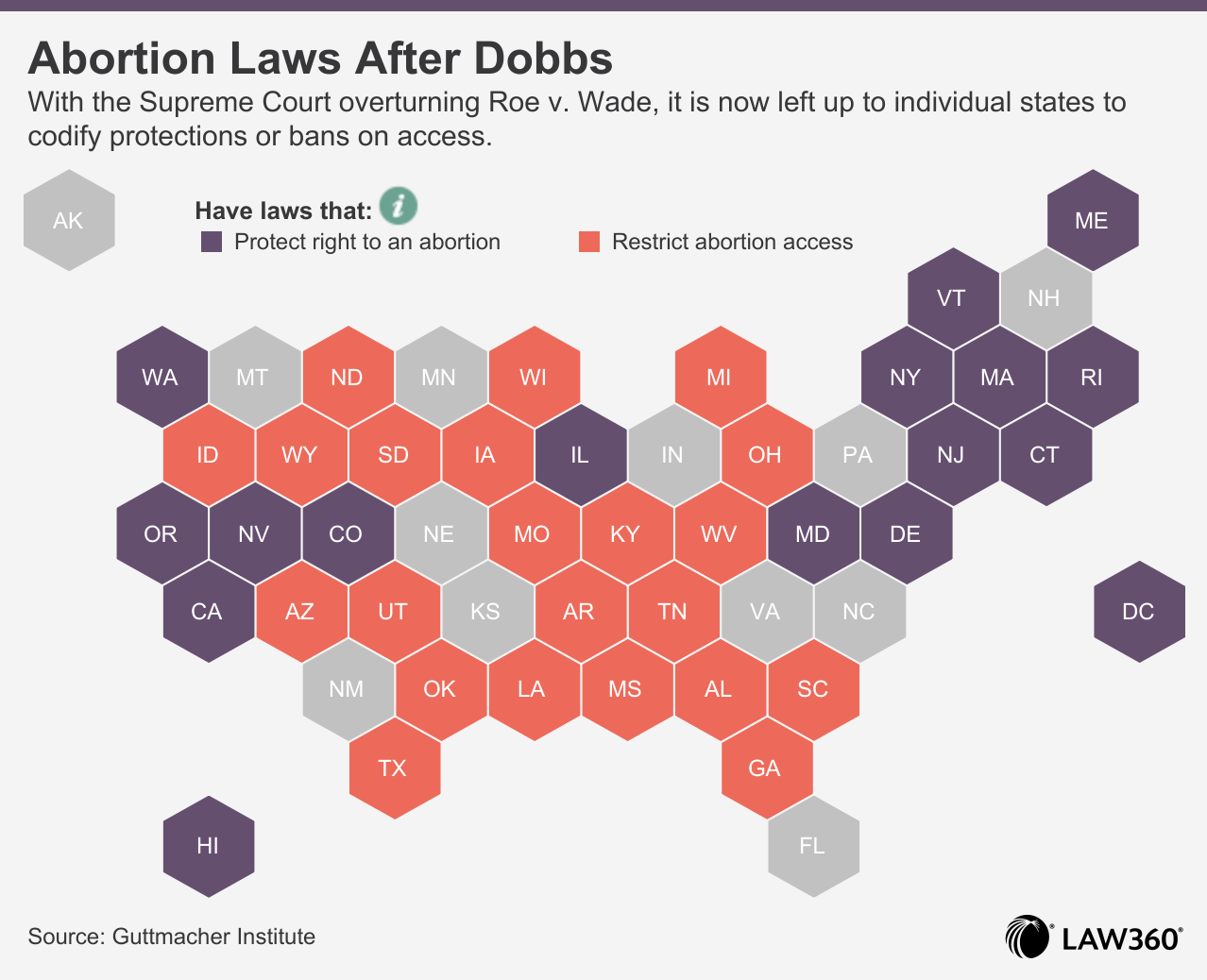 
Texas Attorney General Ken Paxton said in an advisory opinion after the decision that abortion providers could be criminally liable starting Friday under laws enacted before Roe. Paxton said the state's trigger law would take effect 30 days after the Supreme Court issues its judgment in the case, which typically occurs a month after it issues a decision.

"Texas law in a post-Roe world has already been written," Paxton said. "Now that the Supreme Court has finally overturned Roe, I will do everything in my power to protect the unborn and uphold the state laws duly enacted by the Texas Legislature."

Last year, Texas lawmakers passed S.B. 8, a measure that outlaws abortion after six weeks and gives residents the power to sue abortion providers or anyone else who assists a person seeking the procedure.

A study from the University of Texas at Austin found the number of abortions performed in the state fell by half a month after the law was passed. Oklahoma followed suit in May, passing the nation's strictest abortion ban, which outlaws abortions past the point of "fertilization." Clinics in the state stopped performing abortions after Gov. Kevin Stitt signed the measure late last month.

In Texas, however, prosecutors likely will not uniformly enforce the state's criminal abortion penalties.

Five big-city district attorneys in the Lone Star State previously said they did not plan to pursue criminal charges related to abortion if Roe were overturned. Travis County District Attorney Jose Garza said in a statement Friday that his office wouldn't pursue charges for abortions sought in the Austin area.

"No matter what the law says, I implore you: please, seek medical help if you need it," Garza said.

A 2021 report from the National Association of Criminal Defense Lawyers found doctors, patients or others involved in seeking an abortion could face penalties under laws that pre-date Roe.

There are 4,450 abortion-related crimes listed in the federal criminal code and tens of thousands of state criminal provisions still on the books, as well as state conspiracy, attempt and accomplice statutes that could subject a variety of people to criminal penalties for their involvement in an abortion, according to NACDL.

"Without Roe, the floodgates are now open to prosecution on an unprecedented scale," former NACDL President Nina Ginsberg said in a statement Friday. "Historically, it is the most vulnerable in our communities — those who are economically disadvantaged and people of color — who will be targeted."

While some states followed the high court ruling by outlining new restrictions for abortion, others such as Illinois moved to become regional havens for the procedure.

The court's decision makes abortion illegal immediately in many of Illinois' neighboring states, including Missouri, Kentucky and Wisconsin, and creates uncertainty in others.

Illinois Attorney General Kwame Raoul said during a news conference Friday that more than 10,000 women traveled to the state in 2020 to seek an abortion. He said he expects many more to seek abortions in Illinois after the court's decision.

Raoul spoke after Democratic Illinois Gov. J.B. Pritzker called lawmakers into a special session Friday to update the state's laws in anticipation of the high court decision. Pritzker said lawmakers would work to enact rules that protect the ability of women from out of state to seek abortions in Illinois.

"I'm the most pro-choice governor in the entire nation," Pritzker said. "I'm going to do everything I can to stand up for women's rights."

Raoul said he recently spoke with Wisconsin Attorney General Josh Kaul, a fellow Democrat, about how Illinois could bring Wisconsin abortion providers across the border. The Supreme Court decision reinstates a 173-year-old law in Wisconsin that makes performing an abortion a felony punishable by up to six years in prison and a $10,000 fine.

"We all must stand ready, not only to provide safe access to abortion but safe passage to providers who will provide those services," Raoul said.

Wisconsin Gov. Tony Evers, also a Democrat, called a special session to revisit the law on Wednesday, but the state's Republican-controlled legislature ended the session without action. Planned Parenthood of Wisconsin stopped providing abortions after the court's ruling on Friday.

In Missouri, abortion is now illegal in most cases — including rape and incest — under a trigger law. Missouri Attorney General Eric Schmitt, a Republican, issued an opinion Friday certifying the ban on abortion except when a woman's life is jeopardy.

In other states, lawmakers may be empowered to pass new restrictions on abortion.

In Iowa, the state's Supreme Court last week reversed a 2018 ruling that provided fundamental protections for abortion, leaving lawmakers an avenue to further restrict the procedure. The state doesn't have a trigger law in place, making abortion still legal up to 20 weeks of pregnancy.

There's no trigger law in place in Indiana, either, making abortion legal up to 22 weeks. Lawmakers, however, could act to change that status, too.

Sarah Stoesz, CEO of Planned Parenthood North Central States, which include Iowa, Minnesota, Nebraska and South Dakota, said in a statement that the organization would continue to provide abortions "where it remains legal."

Jenny Pizer, chief legal officer for LGBTQ civil rights organization Lambda Legal, told Law360 that states' ability to enact their own abortion rules will create a host of new and old legal questions without a Supreme Court ruling in place sanctioning abortion on a federal level.

State courts are likely to grapple with new questions about surveillance and how the internet can be used in accessing abortion, Pizer said. More than half of abortions are now done with pills, not surgery, according to the Guttmacher Institute, a research group supporting abortion rights.

In addition, questions surrounding a state's ability to restrict its residents from obtaining an abortion elsewhere bring up old legal issues about whether states have the ability to impose their powers on their neighbors, she said.

"The decision opens a whole new era of tremendous legal complexity and questions about how states relate to each other and how the laws apply," Pizer said. "This is not the first time that we've had profound divisions of society about the rights of people to control their own bodies and their own lives."