By Matt Thompson
Law360 is providing free access to its coronavirus coverage to make sure all members of the legal community have accurate information in this time of uncertainty and change. Use the form below to sign up for any of our daily newsletters. Signing up for any of our section newsletters will opt you in to the daily Coronavirus briefing.


Law360 (May 11, 2020, 4:54 PM EDT) -- The U.K. should base relief given to companies during the coronavirus pandemic on good behavior, denying funds and tax breaks to those doing business in tax havens, a cross-party group of legislators said in a letter released Monday. 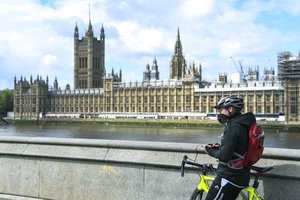 A cross-party group of U.K. lawmakers has urged the chancellor of the Exchequer to withhold pandemic-relief aid from companies doing business in tax havens. (AP)

The letter, dated Thursday, asked Rishi Sunak, the chancellor of the Exchequer, to place conditions on big businesses receiving state aid, such as not being registered in a tax haven, imposing a moratorium on dividends and share buybacks, and curbing excessive executive pay.

It would be wrong to bail out billionaires, "or for public money to go to companies that continue to pay millions to executives or shareholders," said the letter posted by MP Zarah Sultana of the Labour Party, who represents Coventry South.

The document, signed by Sultana and other Labour Party members as well as those from the Liberal Democrats and the Scottish National Party, has the backing of former Labour Party leader Jeremy Corbyn.

Belgium, Denmark, France and Poland have all introduced legislation to block aid to companies operating in tax havens. Olaf Scholz, the German finance minister, said Monday that companies that "evade their duty" to pay taxes in Germany have no claim to state support.

"Strong shoulders carry more because they can," said Scholz, speaking to a virtual conference. "We will ensure that everyone, especially large companies and especially those accepting public aid, do their fair share."

A report released Saturday by Tax Watch encouraged the U.K. to introduce a raft of new measures to ensure that companies or individuals who manage their tax affairs through tax havens can't access taxpayer money. The report listed six proposals it said would ensure better standards of tax compliance in a post-pandemic economy.

The measures include introducing withholding taxes on dividends to ensure that tax exiles and U.K. residents pay the same amount of tax, forcing companies to repay any aid if they are found to have engaged in tax avoidance, drawing up a list of companies that engage in aggressive tax planning and barring them access to aid.

The measure on tax havens garnered support from what would have been an unlikely quarter in past years, George Turner, head of Tax Watch, told Law360.

Glyn Fullelove, president of the Chartered Institute of Taxation, noted that HM Revenue & Customs already maintains a list of companies it deems to be engaged in high-risk tax planning activity. It would be possible to make receipt of a bailout contingent on not being judged "high risk" due to this behavior, Fullelove said on Twitter.

Turner said the comment from Fullelove, who represents tax professionals, "shows the extent to which the conversation in the U.K. has shifted and the mood turned against tax avoidance."

Other measures that the U.K. government could employ involve putting more resources into enforcement, publishing the tax data of large multinational companies and making public the list of companies that have drawn on public support, the Tax Watch report said.

The European Union maintains a so-called blacklist of nonmember countries it considers tax havens. The bloc also publishes a document that has pointed out that six member countries and the U.K. have features of their tax regimes commonly used for aggressive tax planning, such as exporting capital to low-tax or no-tax jurisdictions outside Europe.

The EU countries that are blocking aid to tax haven countries are all drawing on some version of the EU blacklist. However, it would be illegal under European law to block aid to a company based in another EU jurisdiction, the European commission confirmed in April.

HM Treasury declined to comment on the Tax Watch report and did not respond immediately to a request for comment about the legislators' letter.