By Najiyya Budaly
Law360 is providing free access to its coronavirus coverage to make sure all members of the legal community have accurate information in this time of uncertainty and change. Use the form below to sign up for any of our daily newsletters. Signing up for any of our section newsletters will opt you in to the daily Coronavirus briefing.


Law360, London (July 28, 2020, 10:32 AM BST) -- The European Central Bank urged lenders on Tuesday not to pay out dividends to shareholders and to be "extremely moderate" until the end of the year when paying bonuses, extending by three months its recommendations for preserving capital in the banking sector during the coronavirus crisis. 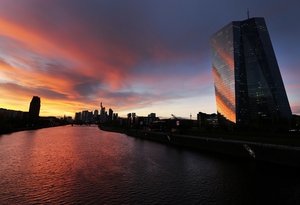 Europe's central bank, pictured, has extended its recommendations after telling lenders in March to halt dividend payments until at least October. (AP)

Banks in the eurozone should not pay dividends until January next year so they can handle losses and hold sufficient money to lend to consumers and businesses during the COVID-19 pandemic, the ECB recommended. Europe's central bank had initially told lenders in March to halt dividend payments until at least October.

The authority said Tuesday that its latest guidance is temporary and will allow eurozone banks to support the economy during the uncertainty caused by the crisis. Lenders should also consider reducing or deferring bonuses for employees to maintain their capital reserves.

The Bank of England also said on Tuesday that it will assess whether to extend past the end of the year its own advice to lenders not to pay out on dividends. Banks agreed in March to suspend payouts following pressure from the BoE.

"The assessment will be based on the current and projected capital positions of the banks and will take into account the level of uncertainty on the future path of the economy, market conditions, and capital trajectories prevailing at that time," the BoE said in a statement.

The ECB added that it is also encouraging banks to dip into their capital and liquidity reserves to lend money and absorb losses. The ECB began relaxing capital requirements in March to ensure that banks have enough cash to withstand the economic fallout of the pandemic.

The central bank said that it will not require banks to start replenishing their stores of capital until 2022, but the deadline will be decided after the next EU-wide stress test in 2021.

"The build-up of strong capital and liquidity buffers since the last financial crisis has enabled banks during this crisis to continue lending," Andrea Enria, chairman of the ECB's supervisory board, said. "Therefore it is all the more important to encourage banks to use their capital and liquidity buffers now to continue focusing on this overarching task: lending, whilst of course maintaining sound underwriting standards."

The EU authority said that the uncertainty caused by the coronavirus crisis is making it difficult for banks to accurately forecast how much capital they hold. The ECB also warned that the level of capital in the EU's banking system could significantly decline if the pandemic leads to severe economic shock.

The central bank said it will review its recommendation to ban dividends in the last three months of the year.