By Jimmy Hoover · Listen to article

Law360 (June 24, 2022, 10:22 AM EDT) -- The U.S. Supreme Court on Friday upheld a Mississippi abortion ban and overturned the constitutional abortion right established nearly 50 years ago in Roe v. Wade, setting the stage for a widespread rollback of abortion rights in many statehouses around the country.

The Supreme Court approved 6-3 a Mississippi law banning most abortions after 15 weeks, well before a fetus is considered viable. Restrictions on abortion before viability are unconstitutional under the 1973 decision in Roe

. Five justices agreed with Mississippi that Roe was wrongly decided and nullified its holding that the Constitution protects a woman's right to an abortion. 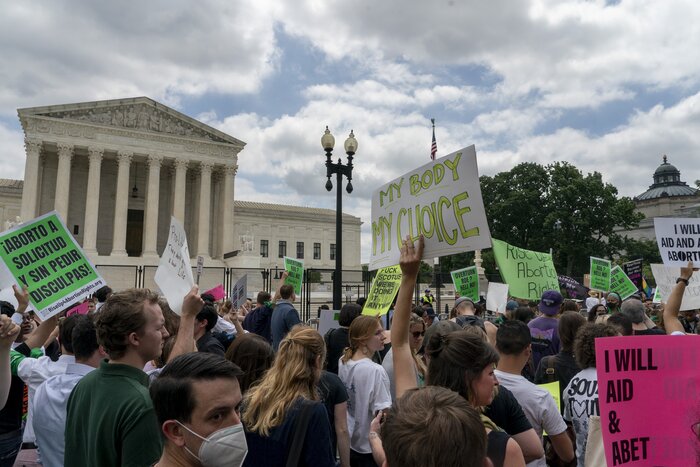 Justice Samuel Alito wrote the opinion for the majority overturning the constitutional right to abortion. Chief Justice John Roberts wrote separately, saying that while he would uphold Mississippi's 15-week ban, he would not entirely overrule Roe and Planned Parenthood v. Casey

Writing for the majority, Justice Alito said that abortion is not protected by the Fourteenth Amendment's due process clause because it is not part of what he called the nation's historical understanding of "ordered liberty." As Justice Clarence Thomas did in the previous day's gun rights ruling, Justice Alito unearthed criminal abortion statutes and prosecutions dating back to medieval times and the Reconstruction Era to support his argument.

"The inescapable conclusion is that a right to abortion is not deeply rooted in the nation's history and traditions," Justice Alito argued. "On the contrary, an unbroken tradition of prohibiting abortion on pain of criminal punishment persisted from the earliest days of the common law until 1973."

The decision, while expected to set off fierce reactions from reproductive rights advocates, will not surprise many. In early May, Politico published a draft version of Justice Alito's opinion arriving at the same result, spurring protests at some justices' homes and the arrest of an armed man outside Justice Brett Kavanaugh's home.

The court's decision will allow states to impose restrictions or outright bans on the procedure. According to the pro-choice Guttmacher Institute, 26 states will likely move quickly to ban abortion. Thirteen of those have so-called trigger laws already on the books that would ban abortion the moment that Roe is overruled.

The three liberal justices on the court took the unusual step of filing a joint dissent in which they called the decision "catastrophic."

"After today, young women will come of age with fewer rights than their mothers and grandmothers had," they wrote. "The majority accomplishes that result without so much as considering how women have relied on the right to choose or what it means to take that right away. The majority's refusal even to consider the life-altering consequences of reversing Roe and Casey is a stunning indictment of its decision."

With protestors gathering outside the fenced-off Supreme Court building Friday, lawmakers, court watchers and legal experts grappled with the scope of the conservative majority's ruling.

Justice Alito's opinion insisted that the ruling in Dobbs does not threaten other rights based on the same constitutional foundation of substantive due process or a right to privacy dating back to the Supreme Court's landmark decision in Griswold v. Connecticut

, which established the right to contraception. Unlike those other rights, including same-sex marriage and same-sex intimacy, abortion is a "unique act" that terminates "potential life," Justice Alito contended.

"And to ensure that our decision is not misunderstood or mischaracterized, we emphasize that our decision concerns the constitutional right to abortion and no other right," he said. "Nothing in this opinion should be understood to cast doubt on precedents that do not concern abortion."

The dissenting justices, however, said that "no one should be confident that this majority is done with its work. The right Roe and Casey recognized does not stand alone."

Those rights "are all part of the same constitutional fabric, protecting autonomous decisionmaking over the most personal of life decisions," they wrote. "Either the majority does not really believe in its own reasoning. Or if it does, all rights that have no history stretching back to the mid-19th century are insecure. Either the mass of the majority's opinion is hypocrisy, or additional constitutional rights are under threat. It is one or the other."

They pointed out Justice Clarence Thomas' concurrence in the case, in which he calls for the court to overrule all of its precedents based on substantive due process, which protects fundamental rights not enumerated in the Constitution. Those include the landmark protections for contraception in Griswold as well as those for same-sex intimacy in Lawrence v. Texas

Reaction to the court's ruling divided sharply along ideological lines Friday. Republican members of Congress celebrated a long-sought victory by the political right and made possible by their successful reshaping of the Supreme Court during the Trump administration. Ultimately, it was the speedy confirmation of Justice Amy Coney Barrett to the bench on the eve of the 2020 election that gave the conservative bloc its crucial fifth vote to scrap Roe v. Wade.

Garland, now the U.S. attorney general, said that the Department of Justice "strongly disagrees with the court's decision." He said that the DOJ supports congressional efforts to codify Roe into law and, further, that it would help other arms of the government provide access to reproductive care like medication abortion, which is widely expected to be the next legal battleground.

In their dissent, the liberal justices said the Supreme Court's new conservative majority trampled over the wisdom of their predecessors, paying special attention to the three justices who reaffirmed Roe with a plurality opinion in Casey: Justices Sandra Day O'Connor, Anthony Kennedy and David Souter, all of them appointed by Republican presidents. In Casey, the court said it would pay a "terrible price" for overruling Roe.

"The justices who wrote those words — O'Connor, Kennedy, and Souter — they were judges of wisdom," the Dobbs dissenters wrote. "They would not have won any contests for the kind of ideological purity some court watchers want justices to deliver. But if there were awards for justices who left this court better than they found it? And who for that reason left this country better? And the rule of law stronger? Sign those justices up."

Update: This story has been updated with more information from the opinions.