Law360 (March 17, 2020, 11:31 AM EDT) -- U.K. fashion and home décor retailer Laura Ashley said Tuesday it was going into insolvency administration in the face of plummeting sales as the coronavirus pandemic keeps shoppers home. 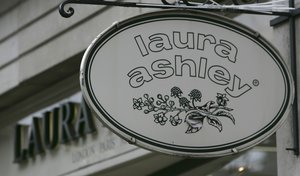 U.K. retailer Laura Ashley said Tuesday it had been in “advanced talks” for new financing, but under its coronavirus-influenced cash flow it won’t be able to get new funds soon enough. (AP)

In the announcement the company said sales for the year had been up through March and that it had been in “advanced talks” for new financing, but that under its latest coronavirus-influenced cash flow projections it will not be able to get new funds “in a timely manner sufficient to support working capital requirements.”

“The directors of the company, its key trading subsidiary (Laura Ashley Limited), Premier Home Logistics Limited, Laura Ashley Investments Limited and Texplan Manufacturing Limited, have concluded that all available alternative options have been explored and therefore, in order to protect creditors, it is necessary to file a notice of intention to appoint administrators in respect of the company and each of the named subsidiaries,” the company said.

Tuesday’s announcement said the company’s directors had been “encouraged” by its performance through March 13, which it said was up 24% over the same period last year.

“However, the COVID-19 outbreak has had an immediate and significant impact on trading, and ongoing developments indicate that this will be a sustained national situation,” it said.

Laura Ashley said parent company MIU Asia Ltd. had confirmed it would be unable to provide financing in the needed time frame, it said.

It said it had filed notices of intention to appoint as administrators Robert Lewis and Zelf Hussain, who under U.K. law will manage the company and create a restructuring proposal.