By Bonnie Eslinger
Law360 is providing free access to its coronavirus coverage to make sure all members of the legal community have accurate information in this time of uncertainty and change. Use the form below to sign up for any of our daily newsletters. Signing up for any of our section newsletters will opt you in to the daily Coronavirus briefing.


Law360, London (May 6, 2020, 4:16 PM BST) -- The U.K. Court of Appeal ruled on Wednesday that paying furloughed Debenhams workers with government money provided to businesses affected by the COVID-19 pandemic doesn't shield the department store chain's administrators from having to pay out for contractual obligations as holiday pay. 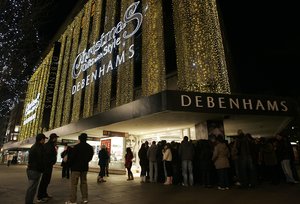 The ruling means that the wages of workers at the Debenhams store chain become payable as expenses of the administration. (AP)

The judgment written by Court of Appeal Judge David Richards concluded that, by participating in the government scheme, the administrators would be "adopting" the contracts of the furloughed employees within the meaning of the Insolvency Act.

For reasons "which do not essentially differ from those given by [High Court Judge William Trower], we conclude that the administrators have ... adopted the contracts of those employees who have consented to be furloughed," the appeals judge wrote.

During an April 22 hearing before the Court of Appeal, a lawyer for the administrators, Tom Smith QC of South Square, argued that the lower court's decision created a potential minefield of difficulties for administrators deciding whether to place and retain employees on furlough if it meant that they were accepting the additional liabilities of the employee contracts. But the appellate judges were not persuaded.

"We can see that there may be good reasons of policy for excluding action restricted to implementation of the scheme from the scope of 'adoption' under [the act], but such exclusion cannot be accommodated under the law as it stands," Judge Richards wrote.

The administrators had asked the High Court for a declaration stating that employees who were furloughed as part of the government's Coronavirus Job Retention Scheme prior to the administrators' appointment should not be treated as adopted.

In the alternative, the administrators asked for an order saying that the amount payable under the "adopted employment contracts" is limited to the amount that can be claimed from the U.K. government under the job retention grant: 80% of wages for the furloughed period, capped at £2,500 per month.

High Court Judge William Trower, however, refused to make the declaration sought by the administrators, a decision the appellate court endorsed.

In the absence of any employee respondent to the administrators' application, "the judge for good reason did not feel it was right to make a declaration in final terms as to whether the contracts of employment would be adopted," the Court of Appeal ruled. "The order he made was nonetheless of value because it provided a practical answer to the question and it permitted the administrators to proceed on the stated basis, without risking any personal liability to creditors or others for doing so."

Debenhams Retail Ltd. has some 15,550 employees. After the government announced its lockdown measures to combat the spread of the COVID-19 infection, the company closed its stores on March 25, and subsequently placed 13,867 employees on furlough, according to the store's administrators, who were appointed on April 9.

Smith had argued that paying the furloughed employees under the government scheme could be done without deeming that the administrator had elected to treat liabilities as having super-priority, because the remuneration would be reimbursed or funded by the government and thus the payments had no impact on the administration estate, Wednesday's judgment noted.

But the Court of Appeal said the intention of the administrator was not relevant to whether the employment contracts were continued.

"If the officeholder has continued their employment, in other words has taken active steps to continue their employment, that necessarily results in super-priority for the relevant liabilities under the contracts of employment," the judgment states.

Furloughed employees who accept paychecks under the government scheme still remain bound to other aspects of their contracts, the Court of Appeal noted.

"For example, as the scheme states, furloughed employees are free to undertake voluntary or paid work for others, but only if permissible under their employment contracts," the judgment states. "They remain bound by duties of loyalty and the like. They will remain available, and they will be obliged, to provide their services to the company as and when it is able to re-open its stores."

Under the Insolvency Act, liabilities stemming from employee contracts adopted by an administrator more than two weeks after their appointment are given "super-priority" and, thus, get in front of the line before a company's other debts.

A similar ruling was issued on April 14 by High Court Judge Richard Snowden relating to employees of the insolvent Italian restaurant chain Carluccio's.

Debenhams announced back on April 6 that it had filed a notice of intent with the British courts to appoint an administrator, saying the move aims to protect the retail chain from legal action that could push it into liquidation while its 142 stores are closed.

Representatives for the administrators did not immediately respond to a request for comment Wednesday on the Court of Appeal's decision.

The case is Debenhams Retail Ltd., case number A2/2020/0631, in the Court of Appeal, Civil Division, on appeal from the High Court of Justice of England and Wales.