By Paige Long
Law360 is providing free access to its coronavirus coverage to make sure all members of the legal community have accurate information in this time of uncertainty and change. Use the form below to sign up for any of our weekly newsletters. Signing up for any of our section newsletters will opt you in to the weekly Coronavirus briefing. 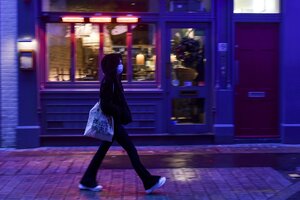 The campaign group has argued at the High Court that the contract for support during the first wave of COVID-19 was awarded unlawfully. (AP Photo/Alberto Pezzali)

The Good Law Project mounted a challenged at a one-day remote hearing at the High Court. The not-for-profit campaign group argued that the contract was awarded to Public First Ltd. unnecessarily and without any advertisement or competition between bidders. This was in breach of public procurement regulations, the group said.

Jason Coppel QC, counsel for the group, argued before Judge Finola O'Farrell that the government has been unable to prove that it was "strictly necessary on grounds of urgency" to award the six-month contract to Public First without competition. As a result, the award should be declared unlawful and quashed.

Under the deal, the small polling company ran focus groups and provided messaging support as Prime Minister Boris Johnson announced a raft of policies and restrictions aimed at combating the spread of COVID-19.

The Good Law Project says that the Cabinet Office entered into a "handshake" deal with Public First on March 3 and that the award was not made public until it was formalized on June 5. The group says the contract was for a disproportionately long period and that the Cabinet Office ignored the active market in qualitative research services that could have taken part in a bidding process.

The Good Law Project also alleges "apparent bias" in the way the contract was awarded. It pointed to established relationships between the head of Public First, the prime minister's former adviser Dominic Cummings and Minister for the Cabinet Office Michael Gove.

"The decision [to award the contract] was taken by Mr. Cummings and Mr. Cummings alone. He is friends with the directors of Public First, as he says in his statement, and has had a close working relationship with them in the past," Coppel said. "There was no objective consideration of other providers…There was no documentation of the decision at the time or of the justification for appointing Public First."

Coppel took the judge through correspondence between civil servants who the Good Law Project claims knew that the award of the contract without competition on Cummings' instructions was a "debacle." The correspondence also raised concerns about the company's ability to be objective because of its links to the Tory party, Coppel said.

The government argues that there is no merit to The Good Law Project's case. It says the deal met all the conditions required under the public procurement regulations, and argued that Public First was simply the better choice of the only two companies in the market that had the scale and experience required in March.

The Cabinet Office also says that a "fair-minded and informed observer" would not find the decision biased.

The government's lawyers said in documents submitted to the court for Monday's hearing that Gove had no involvement in the appointment of Public First. The argued that Cummings did not suggest the company should be brought in because of his connections but because of the quality of its work and the "urgent need" for an effective communications campaign, given the seriousness of the pandemic at that time.

But Coppel hit back at that argument on Monday, arguing that the contract was for non-urgent, policy-related work and the government had alternative options under procurement law that they ignored.

He also told the judge that the government has spent the "extraordinary amount" of more than £508,000 in fighting the action since it was launched in July, even though it should have been an "open and shut case" in procurement terms.

Coppel said that this was an important case, because of the political personalities involved and because of the law at stake. It is the first time an English court has been asked to rule on a public contract procurement process by applying strict criteria from EU case law, he added.

"This case will set important standards for the future," Coppel said.

The Good Law Project has mounted several other challenges to the government's decisions during the pandemic, including three multimillion-pound contracts it entered into for the supply of personal protective equipment. The contracts were finalized under a new approach that allows for negotiations in times of "exceptional urgency," which the government says it is no longer using.

The Cabinet Office is represented by James Eadie QC of Blackstone Chambers and Michael Bowsher QC, Ewan West and Anneliese Blackwood of Monckton Chambers, instructed by the Government Legal Department on behalf of the Secretary of State.

The case is The Queen on the application of the Good Law Project v. Minister for The Cabinet Office, case number HT-2020-000290, in the High Court of Justice of England and Wales.