Insurers Have Paid Out £470M In COVID Biz Cover Claims


Law360, London (March 23, 2021, 10:52 AM GMT) -- Insurers have paid out more than £470 million ($646 million) on claims linked to COVID-19 made by businesses affected by a Supreme Court ruling in January that backed the Financial Conduct Authority's test case on liability, the watchdog has said. 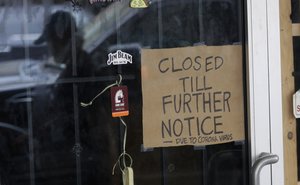 The payouts represent approximately half of policyholders who have had claims accepted for business disruption during the health crisis, the FCA said. (AP Photo/Eric Gay)

The total is made up of full and interim payments on claims on business cover made by companies forced to close by government-imposed restrictions during the pandemic, the FCA said on Monday. The payouts represent approximately just half of the policyholders who have had their claims accepted.

The regulator brought a High Court test case against eight insurers in July to win a ruling on whether policies on business interruption with certain additional clauses would offer cover against closures brought about by government lockdowns.

The case was appealed directly to the Supreme Court: Britain's highest court ruled in January that insurers were liable in some cases, particularly when a policy offered cover for closure as a result of an outbreak of infectious disease.

The FCA has, since then, asked insurers to send it data on how many of their policies are affected by the court decision.

Another 2,000 policyholders have received £192 million in interim or initial payments.

"The claims numbers reported as those where the insurer has received all the information needed to calculate the total value of the claim reflect the insurer's view," the FCA added on Monday.

The size of the payouts fall short of estimates by the Association of British Insurers, which said last month that insurers will probably have to pay £2 billion in claims for business interrupted by the coronavirus outbreak. A spokeswoman for the trade body said there was a difference because it had published numbers for all such claims during 2020, while the FCA's numbers were specifically for claims affected by the Supreme Court ruling.

The FCA said Monday that its numbers could be affected because insurers took differing positions on the same policy wording.

"We noted some insurers may have reached different conclusions on whether similar policies are, in principle, capable of responding to the COVID-19 pandemic," the FCA said. "This may affect the number of accepted and pending claims that some insurers have reported.

"We will work with relevant insurers to ensure consistency in future reporting and will gather and publish this data each month."