Law360, London (November 16, 2020, 5:42 PM GMT) -- Insurance companies accused the Financial Conduct Authority on Monday of attempting to "reverse engineer" policies to win cover for hundreds of thousands of businesses forced to close during the coronavirus lockdown as arguments began at the U.K. Supreme Court in a test case. 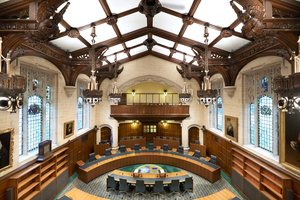 A test case has got under way at the Supreme Court in London as six insurance companies seek to overturn a September ruling on pandemic cover. (Getty)

Gavin Kealey QC, counsel for MS Amlin, argued that the High Court had misinterpreted the contracts by ruling that insurance policies that provided cover only when a business was forced to close as a result of a disease within 25 miles of a premises effectively offered cover against a global pandemic.

High Court Judges Christopher Butcher and Julian Flaux ruled in September that policyholders could be covered if it was possible to determine there had been a single case of COVID-19 within that radius.

But Kealey said the court should ask whether the lockdown would have happened, and whether businesses would have faced losses, even if those local cases had not happened — a legal test of causation.

"If someone with COVID-19 travels from London to Edinburgh by train, [any company] within 25 miles of that railway line would suddenly be able to recover all of their business interruption losses as a result of that one person," Kealey told the Supreme Court.

The FCA had sought to "reverse engineer those cases… into the insured peril," he added.

MS Amlin is one of six insurers seeking to appeal the judgment on Sept. 15, which was largely in favor of policyholders.

The test case on business interruption insurance was brought by the City regulator. It wants to determine whether a representative sample of eight insurers with 21 policy wordings would have to pay out on claims to thousands of businesses forced to close during the country's first COVID-19 lockdown, which started in March.

Several of the insurers in the case, including MS Amlin, provided cover for business interruption if a so-called notifiable disease outbreak within a fixed radius of the premises meant a company was forced to close temporarily.

The remainder of the insurers will continue making their case to the court on Tuesday before the FCA sets out its replies.