AXA Offers €300M To Settle With Restaurants Hit By COVID


Law360, London (June 10, 2021, 12:15 PM BST) -- AXA France has offered to pay a settlement of €300 million ($365 million) to 15,000 restaurant owners in France who were hit by the coronavirus pandemic as the insurer hopes to draw a line under a series of legal disputes over business interruption policies. 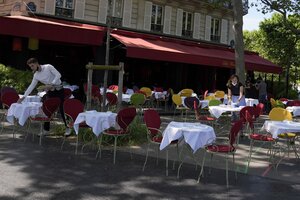 AXA France has faced litigation from restaurant owners in Paris, pictured, and across the country over its business interruption policies during the national coronavirus lockdowns. (AP Photo/Francois Mori)

The Paris-based company said the settlement was unprecedented but would enable all those caught up in the dispute over claims payouts to "look to the future." AXA France has faced litigation for the last year from restaurant owners over whether its business interruption policies offered cover against government-ordered lockdowns.

"We regret the misunderstandings with some of our restaurant clients, especially given this sector was particularly hard hit during the sanitary crisis," Patrick Cohen, chief executive of AXA France, said. "As restaurants are finally allowed to welcome their customers again we are taking this initiative so that everyone can look to the future and focus on the restart of economic activity."

The settlement will cover up to 15% of the losses to turnover suffered by policyholders during the 2020 lockdown in France, which ran from March 14 to Oct. 29.

AXA has faced several other legal claims since the start of the pandemic. The insurer lost a high-profile commercial court case in Paris in May 2020 that was brought by the owner of a Michelin-starred restaurant in Paris, Maison Rostang, after the company did not pay out on a claim for business interruption.

The insurer said on Thursday that the settlement offer did not amount to a legal concession. The company "remains convinced by the clarity of the guarantees of the contracts concerned, which do not cover collective administrative closures."

The offer comes after litigation was brought in the U.K. and Ireland over whether insurers are liable to pay up under policies on interrupted business to companies forced to close during national pandemic lockdowns.

The Supreme Court in London ruled in January that insurers should be forced to pay in most circumstances, following a test case brought by the Financial Conduct Authority. More than £700 million ($986 million) had been paid out by insurers by mid-May following the case.

And, in Ireland, four pub owners won a High Court battle against FBD Insurance in February, following litigation that also served as a test case for up to a thousand other businesses.