Law360, London (January 15, 2021, 8:00 PM GMT) -- Even though the U.K. Supreme Court ruled overwhelmingly in favor of policyholders in its landmark business interruption insurance decision Friday, lawyers say litigation over pandemic coverage is likely to continue amid fights over exactly how much insurers are willing to pay out. 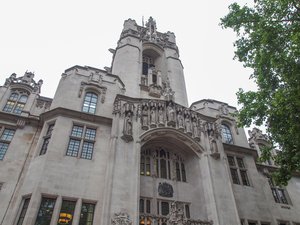 The U.K. Supreme Court ruled Friday that insurers are liable to compensate businesses forced to close due to the COVID-19 lockdowns, but lawyers say disputes over the details are likely to continue. (iStock.com/[claudiodivizia])

The justices ruled in the test case that insurers were liable to compensate businesses forced to close due to the COVID-19 lockdowns for most of the policy wordings included in the case.

But lawyers say that because the ruling did not say how insurers should calculate losses, many anticipate more legal disputes this year over how much policyholders can claim on their policies.

For example, the ruling didn't touch on how business interruption losses should be calculated for companies that have multiple premises, or whether government support should count as part of a business's income.

At the start of the pandemic, the government announced it would provide small businesses with £10,000 ($13,400) grants and hospitality businesses with grants of £25,000. It has also paid 80% of staff salaries under the furlough scheme.

Insurers have, since at least last summer, been considering those grant payments as part of turnover when calculating lost income under a business interruption policy.

The Association of British Insurers defended the deductions in July, saying that otherwise insurers would be "double compensating" policyholders.

But after the FCA wrote to insurance bosses, the group said that 12 of its members had agreed to stop the practice.

City Minister John Glen said in a letter in September that he was "disappointed" that not all insurers had stopped making the deductions. The FCA later clarified that the government business grant payments should not ordinarily be considered part of a customer's turnover when insurers calculate lost income under a business interruption policy.

But the regulator was silent on other forms of government support introduced at the start of the pandemic, like business rates relief, furlough payments to staff or later incentives to encourage people to eat out in the summer.

"That's certainly a big issue that all the loss assessors are facing — that insurers are effectively banking the benefits of the furlough payments as savings," said Roger Franklin, head of insurance litigation at Edwin Coe LLP.

"There seems to be a moral issue associated with that, on whether insurers should get the benefits of government subsidies," he said. "There may well be further litigation over those issues."

Franklin said the FCA's guidance so far on the issue had been "a bit woozy" and hadn't provided a clear set of rules.

Angus Rodger, a partner at Steptoe & Johnson LLP, said that while there was the prospect of litigation, many small and medium-sized businesses covered by the Supreme Court ruling may be able to complain through the Financial Ombudsman Service.

The FOS allows businesses with a turnover of up to £6.5 million to complain against insurance companies, with a potential award limit up to £350,000.

While the FCA could step in and resolve some of those questions by issuing definitive guidance, the question of how claims would be paid to businesses that had several different premises may prove thornier, according to Fenchurch Law Ltd. partner Aaron Le Marquer.

Insurers typically limit the total amount they will pay out "in the aggregate" for multiple claims over the course of a year, for any one occurrence of an insured event. But Le Marquer said the Supreme Court did not rule on whether the closure across the country of each outlet of a retailer or restaurant chain counted as a single occurrence or multiple different occurrences.

"The question arises whether the business as a whole has suffered one loss, or whether each of their premises has suffered a loss," he said. "That can mean the difference between a £100,000 claim or a £10 million claim under a lot of these policies."

"For some of the larger policyholders with more significant and complex losses, that's going to be a key focus for litigation over the coming year," he added.

And there's likely little the FCA can do to resolve that issue because it was likely to depend on the individual circumstances of the business and the policy wording, Le Marquer said.

Although the High Court skirted the issue in September, the Supreme Court dove headlong into the unpopular ruling insurers had pinned their appeal to, Orient-Express Hotels v. Assicurazioni Generali

In that 2010 case, a New Orleans-based hotel operated by the Orient Express chain was making a claim against its business interruption policy after storm damage arising from Hurricane Katrina closed it for two months in 2005.

But the initial arbitration hearing and the High Court at the time ruled that the hotel would have suffered business losses even if it had not been damaged, because New Orleans was effectively forced to shut down after the hurricane. It was therefore allowed to claim only a limited amount on its policy — as if it had been an undamaged hotel in a damaged city.

The Orient Express case has been used widely in trends clauses — which adjust how much a business can claim — and in establishing causation under insurance contracts.

In the present case, many insurance companies argued that businesses would have suffered losses even had they been allowed to remain open during the COVID-19 pandemic, as people would have stayed at home.

But the Supreme Court said Orient Express was "wrongly decided" and overruled it. It said that factors that gave rise to the insured peril should also be considered in a counterfactual scenario, when working out how much a business would have otherwise earned.

"It will likely have an impact on disaster-type claims, where the insured peril doesn't only damage the particular insured property but also causes a wider impact on the surrounding area," said Lewis, who represented the FCA in the present case.

"In assessing how that business would have performed, you would have a counterfactual of a world where the insured peril, be it a flood, storm or hurricane, hadn't hit at all," he said.

The change will likely mean insurers would have to pay out more than they now do for natural catastrophe claims, according to Naz Gauri, principal associate for insurance litigation at Eversheds Sutherland.

"It's a hard market as it is, as a result of natural catastrophe losses of the kind that would be most relevant to these clauses," he said. "It may be that this has an increasing effect on premiums."

Gauri said it was unlikely that insurers would be willing to amend policies at renewal to limit coverage in the same way that Orient Express had done previously.

"Orient Express was a counterintuitive decision," he said. "The perverse outcome it leads to, is that the worse the event that gives rise to the damage, the less likely the insured is able to recover. It's quite difficult for them to justify writing in policy wordings which preserves the outcome of that decision."

"It's not beyond the wit of someone to come up with policy wording that could restrict losses in the context of wide area damage," he said.