UK Halts All Jury Trials To Stem Spread Of Coronavirus

Law360, London (March 23, 2020, 12:25 PM GMT) -- All jury trials in England and Wales have been temporarily put on hold until they can be held safely as part of the latest measures to stem the spread of coronavirus infections, the head of the judiciary said Monday. 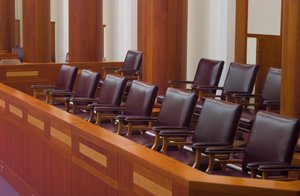 No new trials would start after Monday, the lord chief justice of England and Wales said in a letter to judges. (iStock)

Ian Burnett, the lord chief justice of England and Wales, said in a letter to judges that no new trials would start after Monday. Ongoing trials will be suspended while measures are brought in to ensure social distancing is in place in courtrooms and in court buildings.

All hearings in the crown courts that can lawfully take place remotely should do so and other hearings not involving a jury should continue if suitable arrangements can be made to ensure distancing, Burnett said.

“I have decided that we need to pause jury trials for a short time to enable appropriate precautions to be put in place,” Burnett said. “My unequivocal position is that no jury trials or other physical hearings can take place unless it is safe for them to do so.”

Burnett announced last week that no new jury trials would take place in England and Wales if they were expected to last longer than three days. Courts in Scotland and Northern Ireland have already put a stop to new jury trials.

Burnett said on Monday that arrangements had been put in place to use telephone, video and other technology to allow as many hearings as possible to continue remotely. HM Courts and Tribunals Service, an executive agency of the Ministry of Justice, is “working round the clock” to update the equipment available, he added.

But Burnett said efforts to finish existing jury trials should continue where safe to do so, telling the courts to use “considerable imagination and flexibility” to achieve that. Resident judges, with HMCTS staff, will determine whether a trial can safely be continued, he said.

Trials already under way would be adjourned for a short period if necessary to put those safety measures in place. Jurors would only summoned for trials where safety arrangements are in place. In some cases, this may mean that jurors may be called in to start a new trial later on Monday.

“HMCTS will continue to work to ensure that safety measures are in place in all parts of the court building in which trials are already taking place,” Burnett said.

The decision to extend the suspension follows complaints about the standards of hygiene and facilities within court buildings, such as lack of soap, hand sanitizer and running water as well as the cleaning of conference rooms and courtrooms.

The Ministry of Justice had insisted last week that courts would be kept open despite the government advising citizens to work from home and avoid socializing to stem the spread of COVID-19 — particularly in London.

“As the prime minister has been telling the country, the spread of COVID-19 has continued to accelerate. The clear message from government is to take all precautions to avoid unnecessary contact,” Burnett said. “A review of the arrangements in our courts is called for.”

In guidance issued Thursday, Burnett told civil and family court judges that the "default position" now is that hearings should be conducted with one or more participants attending remotely.

The judiciary also distributed further guidance on Sunday on how to handle remote hearings, noting that “undertaking numerous hearings remotely could test resources.

According to the guidance, remote hearings should, so far as possible, still be public hearings. Court officials should relay the audio and video of the hearing to an open court room, or live-stream the hearing over the internet.

Participants who wish to attend the remote hearing must log in using Skype or another service and will be invited into the hearing by the judge or court official, the guidance stated.