By Paige Long and Joanne Faulkner
Law360 is providing free access to its coronavirus coverage to make sure all members of the legal community have accurate information in this time of uncertainty and change. Use the form below to sign up for any of our daily newsletters. Signing up for any of our section newsletters will opt you in to the daily Coronavirus briefing.


Law360, London (May 21, 2020, 7:21 PM BST) -- A London judge ruled Thursday that it was too soon to grant Venezuela's central bank a fast trial over the release of €930 million ($1 billion) worth of gold from the Bank of England because of competing claims to the country's presidency and money. 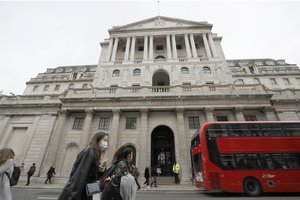 The Bank of England, which holds the gold bullion for Venezuela as custodian, says it has received conflicting instructions from the two men both claiming the presidency. (AP/Matt Dunham)

Judge Nigel Teare said that while the dispute over who has the authorization to secure the release of the gold bullion is a matter of "considerable importance," the court and the parties involved in the case will be in a "much better position" to decide the scope of any expedited hearing on the matter in seven days' time.

The country wants the proceeds to be used to help it fight the spread of the coronavirus. The Bank of England, which holds the gold bullion for Venezuela as custodian, says it has received conflicting instructions from the two men both claiming the presidency.

Banco Central De Venezuela filed its claim against the BoE with the High Court of England and Wales on May 14, seeking an order that would force England's central bank to sell part of the Venezuelan gold reserves. The money should be sent directly to the United Nations Development Programme so it can be used to buy medicine and food for Venezuelans struggling amid the COVID-19 emergency, according to the suit.

Tim Lord QC, counsel for Banco Central De Venezuela, told Judge Teare on Thursday that the UNDP has already approved his client's plan, in which the gold proceeds will be sent directly to the program and used for humanitarian purposes only. Lord has been instructed by Calixto Ortega, the central bank chief appointed by President Nicolás Maduro.

However, the Bank of England says it cannot act on the instructions because of competing claims to the money from Venezuela's opposition leader Juan Guaidó, who has declared himself interim president of the country.

The BoE filed its own application this week seeking an adjournment on all issues until early June to give Guaidó and his legal team more time to engage with the dispute and to let the central bank itself get up to speed on the nature of other connected proceedings that are subject to a privacy order.

The BoE has also indicated it could ask for a stay of proceedings, pending the resolution of related legal actions.

Lord opposed any delay Thursday, telling Judge Teare that the English central bank has already had enough time to prepare for the application and his client does not accept that Guaidó has "any legitimate claim" for seeking to intervene.

The judge, however, ordered an adjournment of seven days. Directions for a six-day trial over the disputed authorization will now be made at a hearing on May 28.

"Care is needed to lay down a feasible and realistic timetable," the judge said.

Banco Central De Venezuela says the transfer is urgent, as the Bank of England's refusal is "depriving BCV of access to its gold reserves at a time of national and global emergency," effectively keeping the country and the U.N. program from accessing funds needed to pay for ventilators, drugs and other supplies.

In a statement before the hearing, Sarosh Zaiwalla, a partner at Zaiwalla & Co. representing BCV, alleged the BoE's "foot dragging" was hampering Venezuela's efforts to fight the viral outbreak.

"The paternalistic approach of the Bank of England smacks of the post-imperialist hangover that has seen Western countries intervene in the internal politics of many nations across the world," Zaiwalla said. "This gold belongs to the people of Venezuela and there is no rational reason for it to be withheld from the United Nations Development Program, where it will be used directly to save lives in the fight against COVID-19."

The central bank of Venezuela is represented by Tim Lord QC and Max Schaefer of Brick Court Chambers and Amy Rodgers of 11KBW, instructed by Zaiwalla & Co. Ltd.

The Governor and Company of The Bank of England is represented by Brian Kennelly QC of Blackstone Chambers, instructed by Herbert Smith Freehills LLP.

Guaidó is represented by Andrew Fulton and Mark Tushingham of Twenty Essex, instructed by Arnold & Porter.

The case is Banco Central De Venezuela v. The Governor and Company of the Bank of England, case number CL-2020-000304, in the Commercial Court, Queen's Bench Division of the High Court of Justice of England and Wales.