Law360, London (October 6, 2020, 1:38 PM BST) -- A judge gave the British arm of a struggling Spanish gaming giant the green light to restructure itself on Tuesday after creditors voted overwhelmingly to approve a €250 million ($295 million) rescue package to stop the company running out of money during the pandemic. 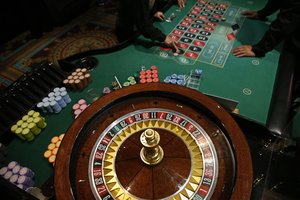 The British operation of the Spanish company, which runs gaming halls and racetracks, has been given the green light to restructure itself. (AP Photo/Sue Ogrocki)

Codere Finance 2 (UK) Ltd.'s reorganization will give it the best shot at reshuffling its worldwide operations and will probably pass muster in overseas jurisdictions such as the U.S., Judge Sarah Falk said at the High Court.

Almost every creditor voted in favor of the package at a meeting in September, by 249 to 1. The result represents 99.9 percent of the value of their investment in Codere, which runs gaming halls, racetracks, betting locations and online gaming.

After the overwhelming vote, and after a hedge fund abandoned its opposition to the plan, the judge said she is "satisfied there's substantial evidence" that restructuring will benefit the group.

Lawyers have said at hearings over the last two months that Codere's gaming operations have been curtailed by venue closures brought about by the pandemic.

The gaming group runs gambling games in countries including Spain, Italy and Latin America. But it has some American creditors and its notes are subject to New York law, the judge said.

The proposed plan has two main elements involving Codere's existing creditors under two existing loan arrangements, one for €500 million and another for $300 million.

The plan would allow creditors to lend up to €165 million of new money to the group if they wish to do so. Additionally, the maturity date for the existing notes, currently due in November 2021, would be pushed back by two years.

The terms of the restructuring deal were negotiated between Codere and the ad-hoc committee of creditors, who hold a 55% beneficial interest in the two existing debts. Four members of that group also took on €85 million in "interim notes" that a Codere subsidiary issued in July 2020, according to Codere.

The plan was initially opposed by Kyma Capital, which owns less than 1% of the value of the existing notes. Kyma argued that lumping the creditors together for one vote would be unfair to those members who are not part of the ad hoc group.

But, on Tuesday, Codere's counsel, David Allison QC, said that Kyma had dropped its opposition and voted in favor of the plan.

Allison said that no special agreement had been struck with the hedge fund, only that Codere had agreed to pay its legal fees.

"Kyma is getting the same deal as everyone else," Allison said.

The case is Codere Finance 2 (UK) Ltd., case number CR-2020-003544, in the High Court of Justice of England and Wales, Chancery Division, Insolvency and Companies List.