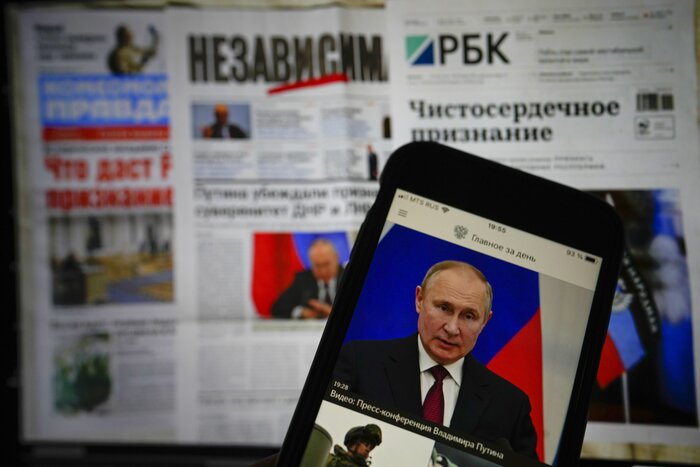 The Bank of Russia has responded to Western financial sanctions after Vladimir Putin ordered the invasion of Ukraine by restricting domestic access to foreign currencies. (AP Photo/Alexander Zemlianichenko Jr)

Faced with tightening western financial sanctions, the Bank of Russia said that citizens holding accounts in dollars and other convertible currencies can withdraw no more than $10,000 in cash until Sept. 9. Withdrawals will be given in dollars, at the market rate on the date, regardless of which currency the account is in.

"Banks may take several days to bring the required amount in cash to a specific branch," the central bank said. Citizens can withdraw the rest of their cash held in foreign currency accounts in rubles at the market rate on the day of issue, the Bank of Russia added.

Russians will continue to be able to hold funds in foreign currency accounts. Lenders will not sell currency to citizens during the next six months, but they can exchange cash currency for rubles at any time and in any amount, the Central Bank of the Russian Federation, as it is also known, said.

The latest controls on the movement of capital were imposed after a decision by the Bank of Russia on Feb. 28 to block foreign investors from selling Russian securities and an order for the Moscow stock exchange to remain closed, as it attempts to stem the flow of money out of the country.

President Vladimir Putin has in the meantime approved a special executive order calling for foreign debt to be repaid in rubles, including on bonds originally issued in foreign currencies, to maintain the stability of the Russian market and protect the interests of creditors.

Concerns are mounting that Russia will have problems serving its hard-currency debt after a string of unprecedented financial sanctions imposed by Britain, the U.S. and Europe. Restrictions included freezing Russian bank assets held abroad and restricting the Russian central bank's access to $630 billion in foreign-currency reserves held abroad.

The Russian central bank's external debt servicing data show that hard-currency debt payments of non-financial organizations, including principal and interest, will total $15 billion in the first quarter of this year and $10.6 billion in the second.

Fitch Ratings warned on Tuesday that "a sovereign default is imminent" as Western constrictions on Russia's financial resources tighten.

The ratings agency downgraded Russia's sovereign ratings — an independent assessment of the creditworthiness of a country for investors — deeper into junk territory. The rating tumbled three notches to a "C" from a "B," which it was assigned on March 2.

"Developments since then have, in our view, further undermined Russia's willingness to service government debt," the agency said.

A "B" rating indicates that material default risk is present but that a limited margin of safety remains. But a "C" indicates a default has begun and that payment capacity is irrevocably impaired.

Fitch blamed the decision to allow only residents to take out foreign currency in rubles. Severe financial sanctions and newly announced oil boycots by the West could also push Russian President Vladimir Putin to strike back with a response that includes a "selective non-payment of its sovereign debt obligations," the ratings agency warned.