By Joel Poultney · Listen to article

Law360, London (May 4, 2022, 2:04 PM BST) -- The European Union rolled out a sixth tranche of sanctions against Russia on Wednesday because of its war in Ukraine, including a phased oil embargo and an order banning Sberbank from an international financial messaging system. 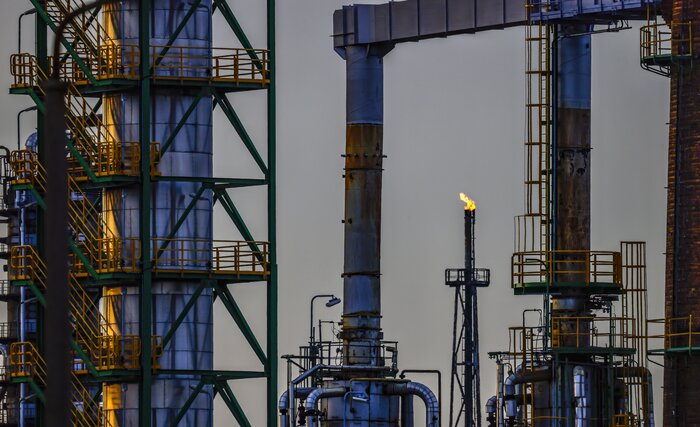 The EU is attempting to maximize the pressure on Vladimir Putin's regime while providing member states, such as Germany which is heavily dependent on Russian oil, with enough time to secure different providers. (Hannibal Hanschke/Getty Images)

Ursula von der Leyen, president of the European Commission, disclosed plans to phase out Russia crude oil imports within six months and refined products by the end of the year. Both are pivotal in the EU's attempt to maximize the pressure on Vladimir Putin's regime while providing member states with sufficient time to secure different oil providers, she added.

"We now propose a ban on Russian oil," von der Leyen told the European Parliament. "This will be a complete import ban on all Russian oil, seaborne and pipeline, crude and refined ... Putin must pay a price, a high price, for his brutal aggression."

The EU has already slapped an import bank on Russian coal. But the bloc has shied away from taking a similar step on oil because of resistance from Germany and other countries that are heavily dependent on energy products from the country.

But von der Leyen warned that getting a consensus behind a plan to ban Russian oil "will not be easy." Some member states "are strongly dependent on Russian oil. But we simply have to work on it."

The head of the EU's executive body also announced plans to remove Sberbank, Russia's largest lender, from the SWIFT system used for global bank transfers. She added that two more banks would also be banned from the network, but did not identify them.

According to Reuters, they are the Credit Bank of Moscow and Russian Agricultural Bank.

The latest sanctions build von der Leyen's earlier announcements, where she warned that a ban on Russian oil was coming. The fifth set of sanctions, announced in April, included a ban on Russian coal, as well as ending European transactions with four key Russian banks.

The president said that ending dependency on Russian oil is a vital component of the bloc's non-military strategy to undermine the Kremlin's war effort and urged the 27 member states to approve the measures.

Von der Leyen said the staggered withdrawal from Russian oil flows would be done in a way that "allows us and our partners to secure alternative supply routes and minimizes the impact on global markets."

She also announced that the EU's executive arm would ban three of Russia's state-owned broadcasters from European airwaves. She told lawmakers this will muzzle the "mouthpieces that amplify Putin's lies and propaganda," and will mean a blackout across all multimedia services.

Von der Leyen said Brussels would also begin blacklisting high-ranking military figures and others who are said to have committed war crimes in Bucha, a suburb of Kyiv. Those responsible for the "inhuman siege" of the Black Sea port city of Mariupol will also be included on the list.

European countries are "depriving the Russian economy from its ability to diversify and modernize" by taking these measures, von der Leyen added.