Law360, London (March 25, 2020, 5:33 PM GMT) -- A London judge refused Wednesday to release WikiLeaks founder Julian Assange, who is fighting extradition to the U.S., from prison after his lawyers had argued he should be granted bail because he was vulnerable to contracting the coronavirus in prison. 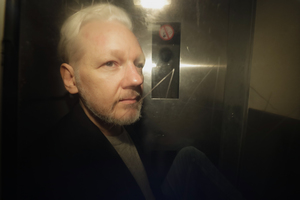 A lawyer for Julian Assange argued that the coronavirus can spread rapidly in Britain’s overcrowded prisons. (AP)

District Judge Vanessa Baraitser refused the bail application at a hearing at Westminster Magistrates Court that was attended by fewer than 20 people because of the nationwide lockdown put in place by the British government in response to the COVID-19 outbreak.

The 48-year-old Australian national is being held at Belmarsh prison in southeast London while awaiting potential extradition to the U.S. on 17 charges of violating espionage law and one count of computer misuse that his lawyers claim could see him sentenced to 175 years in a U.S. prison.

Assange’s lawyer, Edward Fitzgerald, who wore a surgical mask to court, argued that the virus can spread rapidly in Britain’s overcrowded prisons, claiming there are already 100 staff off sick with coronavirus symptoms at Belmarsh.

But Judge Baraitser held that Assange was a flight risk because Assange skipped bail and fled to the Ecuadorian embassy in London in 2012 when facing sexual assault allegations in Sweden that were later dropped. He was evicted from the embassy in April and immediately arrested.

“To expose another human being to serious illness, and to the threat of losing their life, is grotesque and quite unnecessary. This is not justice, it is a barbaric decision,” said Kristinn Hrafnsson, editor in chief of WikiLeaks.

Assange is wanted in the U.S. over publishing hundreds of thousands of classified documents covering U.S. conduct in the Iraq and Afghanistan wars and State Department cables and files containing assessments of detainees at Guantanamo Bay.

He is accused of encouraging leaks by former U.S. Army intelligence analyst Chelsea Manning and of conspiring to hack into the U.S. Department of Defense computer system, in what the U.S. government insists is one of the largest compromises of classified information in U.S. history.

At a preliminary extradition hearing at Woolwich Crown Court in February, U.S. prosecutors alleged that Assange “knowingly endangered” U.S. informants in Iraq and Afghanistan when WikiLeaks published a cache of 250,000 unredacted secret diplomatic cables online in 2011.

Assange’s defense attorney described the case as being built on “lies, lies and more lies” at the hearing, claiming the request to extradite Assange “boldly and brazenly” misrepresented the facts.

A full extradition hearing is due to take place at Woolwich Crown Court in southeast London in May.

Counsel information for the U.S. was not available.