By Richard Crump
Law360 is providing free access to its coronavirus coverage to make sure all members of the legal community have accurate information in this time of uncertainty and change. Use the form below to sign up for any of our daily newsletters. Signing up for any of our section newsletters will opt you in to the daily Coronavirus briefing.


Law360, London (September 10, 2020, 1:45 PM BST) -- The extradition hearing for Julian Assange was temporarily halted in London on Thursday amid concerns that a member of the U.S. government's legal team could have been exposed to COVID-19. 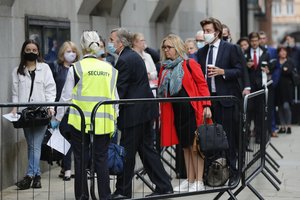 People queue earlier this week to enter the Old Bailey, where a judge has adjourned the Julian Assange hearing amid fears that a lawyer could have COVID-19. (AP Photo/Frank Augstein)

District Judge Vanessa Baraitser adjourned the hearing at the Central Criminal Court until Monday, when the test results are expected to be known. But she added that the case for the WikiLeaks founder could still go ahead via video link, even if the lawyer tests positive for the coronavirus.

"I accept the hearing should be postponed until the outcome is known," Judge Baraitser said, adding that she would make a decision "about how best to go forward" in the interests of justice at next week's hearing.

Assange is fighting extradition to the U.S., where he is wanted to face trial over allegations that he conspired to hack government computers and violated the U.S. Espionage Act by publishing hundreds of thousands of secret military and diplomatic documents in 2010 and 2011.

Edward Fitzgerald, Assange's lawyer, told Judge Baraitser that she had to proceed on the assumption that the lawyer, who was not present in court, had contracted the virus.

"If that is the correct assumption, we shouldn't really be here today," Fitzgerald said. "Coronavirus would be here in the courtroom, and it's not possible to tell how far it's extended. The court staff themselves would be at risk, you yourself may well be at risk.

"Mr. Assange, whose vulnerabilities you are aware of, would be at risk being in the court," Fitzgerald added.

Fitzgerald said the judge had already "reached the fair and principled decision some time ago" that Assange should attend the extradition hearing in person. He argued that it would "not be fair or appropriate" to conduct the hearing remotely.

U.S. prosecutor James Lewis, who appeared by video link and suffered technical problems, said that holding the hearing remotely over video link would add another layer of technical difficulty. He complained that "all I can see is the back of Mr. Fitzgerald's jacket frozen in mid-air."

The hearing, which began on Monday and is expected to last four weeks, has already been postponed from May because of the COVID-19 outbreak.

Judge Baraitser refused on Monday to prevent the U.S. from using new allegations linking Assange to hacking groups as part of its extradition case and denied his attempt to limit or postpone the hearing.

The United States of America is represented by James Lewis QC and Clair Dobbin of 3 Raymond Buildings and Joel Smith of Furnival Chambers.

The case is United States of America v. Assange, case number U20200010, in the Central Criminal Court.